The lightbox-player is a Bash script for Windows Subsystem for Linux, that allows playback of video files across multiple monitors, with different subtitles in each.

This script is designed to power and facilitate the physical constrains of Lightbox, a portable projection unit for the screening of films with subtitles in different languages, enabling the participation and interaction of children from multiple cultural backgrounds.

*For keyboard-only control, use the arrows and hit Enter when the icon is highlighted.

All keyboard shortcusts for Mplayer’s playback apply, but subtitle or other controls may only apply on the first instance.

The script will search inside the ./FILMS directory for subdirectories, which should contain at least one video file (.mp4 / .mkv / .mov / .avi formats) and a number of subtitles (.srt format). The alphabetical order of the subtitle files determines which instance they will play at. When no video file is found within the selected directory, or when the operator selects CANCEL then a callibration image file is played instead.

The lightbox-player is designed to work with minimum input from the operator. It starts with double-clicking the PLAY.bat file, which in turn runs the lightbox-player.sh script without having to manually open a terminal. Creating a shortcut on the desktop allows to “hide” the script and related files elsewhere. Alternatively, the PLAY.bat file can be set to run automatically on startup.

A graphical prompt allows the selection of films discovered in the preset ./FILMS directory. If no video files are found within, then a default callibration routine will start playing in loop until interrupted with the Esc or q key. 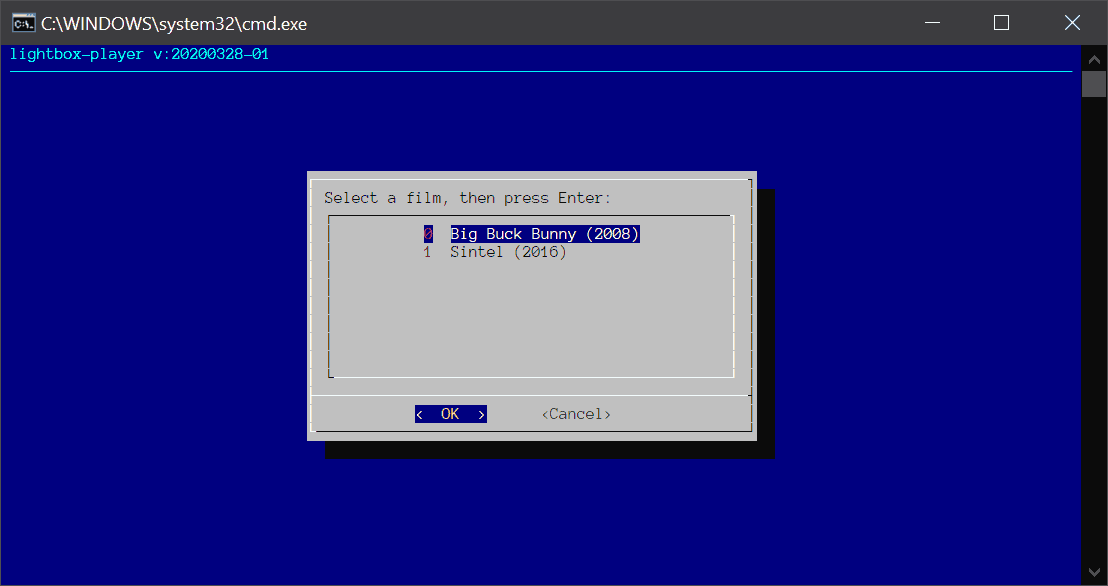 The script used Mplayer to manage video and audio output, in a master-slave setup to synchronise playback across all instances. Because Mplayer is designed to work with the master and slave instances each on a different computer, socat is used to relay the required UDP data to additional slave instances on the same machine on different ports.

A few built-in Windows 10 utilities (wmic.exe and powershell) are used to obtain the width, height and number of monitors connected. These are used for entering the automatic DEBUG mode and creating as many instances as required.

The structure of the script and related files is reflected on the following graph:

⚠️ Do not rename either the ./MPLAYER or ./FILMS directories. Uppercase matters!

When run on a computer with a single monitor connected, it automatically enters the DEBUG mode and simulates the physical 4-screen setup. Otherwise it will open in full-screen a number of player instances equal to the number of monitors or projectors connected (2-4). Only the player corresponding to the first monitor outputs audio.

Due to physical and technical constrains, each projection on the four sides of the Lightbox has a different position on the vertical axis. The projections are 1280×800px, while the screens translated to pixels (as built) are 1280×1061px each, for a total of 5120×1061px, which includes inactive areas. The “equal-height” area is 5120×538px. The following graphic illustrates the position of the projections on each screen, given the fact that projection (1) is aligned to the very top of its respective screen and projection (4) is aligned to the very bottom of its screen.

Films in Widescreen (21:9) format —or techically any ratio larger than, or equal to 2:1— are offset automatically to an “equal-height” area and this allows for a seamless active projection area across all sides.

⚠️ The monitors or projectors have to be in the appropriate order, otherwise the script will not work as intented when displaying Widescreen films. MultiMonitorTool may be handy in this situation.

Films in other formats (16:9, 4:3 etc.) are positioned on the top of the projection area according to each physical screen.

The screenshots above show Sintel and Big Buck Bunny, two open movies by the Blender Institute, available to watch and screen for free.

Before installing utilities in WSL, you may want to update the repository lists with sudo apt-get update.

Made by Heracles Papatheodorou a.k.a @Arty2, MIT Licence